Last night I once again delved into Zarela’s Veracruz, this time cheffing up Sopa de Setas (Mushroom Soup) and Pescado en Chile Limon (Fish with Fresh Lime and Chile Dressing). These are two dishes that made me realize once again that good recipes are like good novels—pieces of art that leave me marveling. I didn’t know flavors like these existed.
I started with the lime and chile dressing, following the recipe almost exactly. The fresh tomatillos and lime really make this recipe; I can’t emphasize enough the taste fresh squeezed lime juice adds to this dressing—don’t cheat yourself by using bottled:
6-8 medium tomatillos, husks removed and rinshed
2 teaspons salt, or to taste
2 jalapeno or serano chiles, stemmed and seeded (I used only half a jalapeno pepper)
4 garlic cloves
½ small white onion, coarsely chopped
8 cilantro sprigs (about 1-2 tablespoons chopped)
½ cup freshly squeezed lime juice (about 2-3 limes)
¼-½ cup water (I didn’t use any)

Put the tomatillos in a pot, cover with water and bring to a boil; then reduce to medium heat and cook until they change color (about 5 minutes). Drain and let cool to room temperature. Once they are cooled, simply combine all the ingredients in a blender and process. The recipe says to add water if needed so you end up with a “slightly soupy consistency” but mine didn’t need water. Set aside.
Next, I moved onto the soup. Here, I made some adaptations according to the ingredients I could find:
3 dried Anaheim chiles, stemmed and seeded (the recipe calls for 3 dried pasilla or mulato chiles, but I couldn’t find those at our local grocery store)
4 cups chicken stock (I used 2 cups of homemade chicken stock left over from the Mexican chicken soup I’d made earlier and 2 cups of store bought chicken broth; the recipe calls for all homemade stock and it definitely adds to the flavor)
6 ounces bacon, diced
3 cloves garlic, minced
8 ounces shitake mushrooms, coarsely chopped
8 ounces oyster mushrooms, coarsely chopped
3 sprigs of cilantro (recipe calls for epazote sprigs, but our grocer didn’t have those; the recipe says you can use cilantro "in a pinch," so I did)
Salt to taste 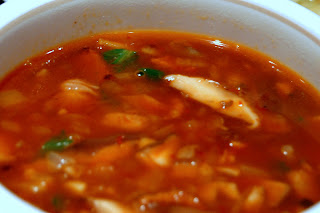 The recipe calls for you to “griddle dry” the chiles, which essentially means you rinse the stemmed and seeded chiles and then place them on a medium-hot griddle or pan, turning frequently until the moisture evaporates and you start to smell the aroma of the chiles (took no more than 30 seconds for my chilies). The recipe cautions against scorching the chiles, which would result in a bitter taste. Then soak the chiles in two cups of chicken stock for 20 minutes. Process in a blender until smooth and run through a strainer into a bowl, pressing all the liquid through. Set aside.
Fry the bacon over medium high heat until crisp and then remove to a paper towel to drain, reserving 2 tablespoons of the bacon grease to the soup pot. Heat the grease over medium-high heat and add the onion and garlic, cooking until the onion is translucent and golden, about 5 minutes. Stir in the mushrooms and cook for 2-3 minutes until they begin to soften. Add the bacon, chile mixture, the rest of the stock, and the cilantro. Cook uncovered over medium-low heat for about 20 minutes. 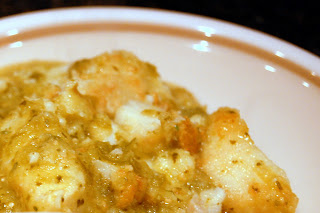 While the soup cooked, I fried about 2 pounds of cod in about ½ cup of rippling olive oil, flipping several times until touched with a light golden brown. Next time I will use a firmer fish that doesn’t break apart so easily; the recipe says red snapper, grouper, sea bass or Pacific rockfish work well. I’ve read that trout also works well with this sauce.
When the fish is almost done, drain the oil from the pan and add the lime and chile dressing and cook for about five minutes or until fish is done. The recipe calls for adding two tablespoons of butter at this point, but unfortunately I forgot; the dressing was divine without it, but I would’ve loved to have tasted it with the butter.
The flavors in these two recipes were amazing—definitely worth trying if you are looking for some authentic south-of-the-border culinary experiences.
at 8:41 AM

Email ThisBlogThis!Share to TwitterShare to FacebookShare to Pinterest
Labels: recipes

Newer Post Older Post Home
Subscribe to: Post Comments (Atom)
"One day in Paris, after I had won a riding competition, my French fellow officers invited me out to dine at one of the finest restaurants, the Cafe Anglais. The chef, suprisingly enough, was a woman. We were served Cailles en Sarcophage, a dish of her own creation. General Galliffet, who was our host for the evening, explained that this woman, the head chef, had the ability to transform a dinner into a kind of love affair, a love affair that made no distinction between bodily appetite and spiritual appetite. General Galliffet said that in the past he had fought a duel for the love of a beautiful woman. But now there was no woman in Paris for whom he would shed his blood--except this chef. She was considered the greatest culinary genius." ~General Loewenhielm, Babette's Feast

Carmen Andres
I am a writer, editor and graphic designer with broad experience in writing, editing, magazine publishing, web management and developing communication strategies for new and traditional media. Currently, I work in public relations and do a bit of freelancing. This is my space to write about popular culture and faith.